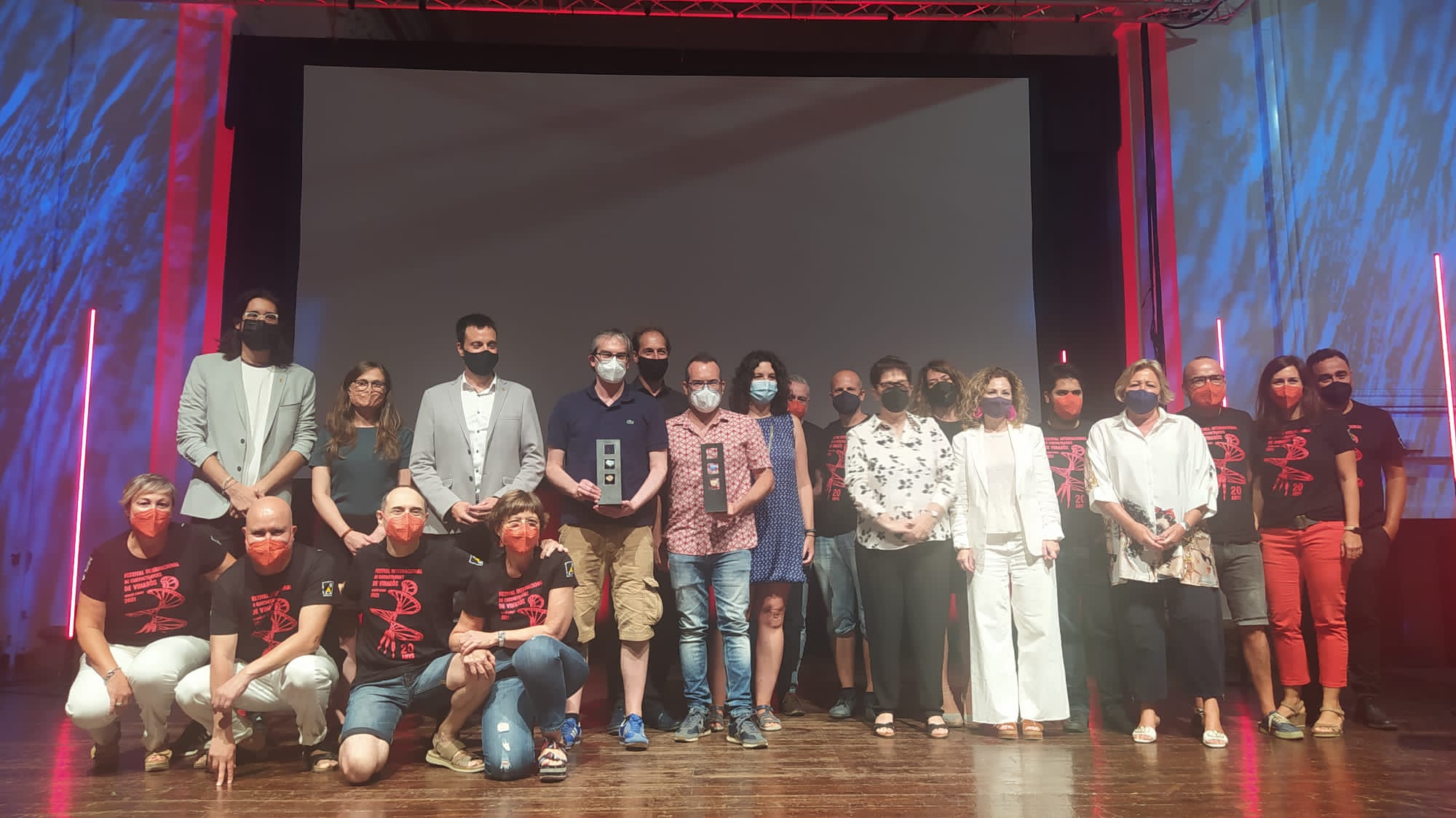 4 agost 2021 | Festival Internacional de Curtmetratges de Vinaròs "Agustí Comes·
Last Saturday, July 31 the 31st of July, the closing gala of the XX edition International Short Film Festival of Vinaròs ‘Agustí Comes’ was held in the emblematic Wenceslao Ayguals D’Izco municipal auditorium. The bullring, the planned location for this ceremony, was rightly replaced by this place due to the inclement weather. As usual, the gala started with the animation video of Manolo Mesa and the projection of 20 scenes of the short films seen in this edition. Then the journalist Noemí Polls, a great professional who has already become part of this festival, started to conduct the gala.

The posters of the four finalists competing for the jury and audience awards were shown on the screen and then the winner ones were announced. Really, the fact of getting to be a finalist is a great milestone, considering that they were 817 films participating. The first  to be proclaimed was the jury award, sponsored by Caixa Vinaròs Foundation .The finalists were La banyera, Stanbrook, Ferrotipos and Distancias. Mrs. Josefa Gondomar, president of Caixa Vinaròs Foundation, revealed that the winning short film was Stanbrook. Then, she gave the word to Mrs Gema Enfedaque, president of the jury and of the Bujaraloz Short Film Contest, who proceeded to read the justification of the jury. You can read it by clicking  here. The economic endowment of both prizes is 1,000 € and a unique sculpture created by Lukas Ulmi. The Stanbrook’s director, Oscar Bernacer, and the leading actor, Àngel Fígols, went up to receive this first prize of the ceremony, thanking the jury for their decision.

After watching Stanbrook, it was time to know the choice of the audience, whose attendance has broken records in this edition. Except for the short film Emilia, replacing Stanbrook, the preferences of the spectators coincided with the ones of the jury. In that case, the audience preference wasn’t a surprise because it was very well embraced during its screening. The mayor of Vinaròs, Mr. Guillem Alsina Gilabert, was in charge of revealing that the short film that won the audience’s award was La banyera. Noemí Polls was in charge of commenting the revelant aspects of this work and of requesting the presence of the director Sergi Martí and the photographer Verónica Moragas. Sergi Martí explained different questions about the filming and gave a few words of gratitude to the audience, but also to the jury for placing his work among the 12 finalists.

This time, no mention was made of the Vinaròs en curt, Felipe Osanz, which is usually held in autumn, perhaps because the last edition could not be held due to the restrictions of the pandemic. Unlike other years and on the occasion of the 20th-anniversary celebration, a music video was screened showing moving images from all the past years. You can see it by clicking here. Finally, Noemí Polls concluded the ceremony by pronouncing the phrase that is the festival’s motto: “As long as there are people wanting to make shorts and people and people wanting to see them, the International Short Film Festival of Vinaròs Agustí Comes will continue to exist.”